Looking for an exciting career with RPD?  Use the above phone number and email to connect with our Recruitment Unit.

Submit a Commendation or Complaint

Question About Your Police Application?

Are you a victim?

How are we doing?

Member of the Media?

Need a Copy of a Police Report?

Report a crime or suspicious incident?

What Precinct/Sector am I in?

The Richmond Police Mounted Unit is one of the oldest, continuous mounted units in the country. The Richmond Police Mounted Unit has multiple functions, which include: daily patrol throughout the entire city of Richmond, crowd control during major events, search/rescue and to build positive community relations. Due to the mounted officer’s high visibility they are considered Ambassadors for the City, capable of maneuvering through a variety of terrain. According to a 2014 study by Oxford University, a mounted officer is six times more likely to be approached by a citizen than an officer on foot. The mounted unit encourages the public to come speak with them and engage with their horses.

Both horses and officers must go through constant training, on-street and off, in order to effectively maintain their skills. It is imperative for the horse and officer to build and maintain a deep bond due to the nature of the situations they encounter on a daily basis.

The horses on the mounted unit work for approximately 10 years, sometimes less if there is a medical issue. Once the horses are eligible for retirement they are offered to the officer first and then the general public. The Richmond Police Mounted Unit makes sure the horses go to suitable, forever homes.

If you see us about the city, stop and talk with us and meet the horses! Of course, should you be driving please find a safe parking spot and walk over. 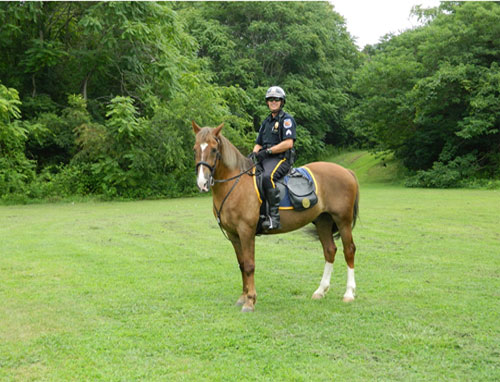 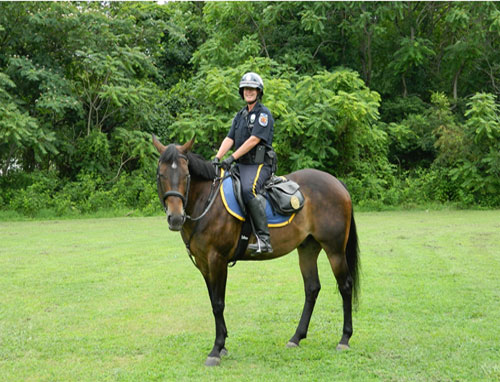 Officer Acuff has been with the Richmond Police Department since December of 1997 and joining the Mounted Squad in 2011. Amanda joins the unit with riding experience and is one of the Unit trainers. Her partner Scooter is a 16 hand, Quarter Horse, born 4/22/2004 and joined the Unit December 2011. 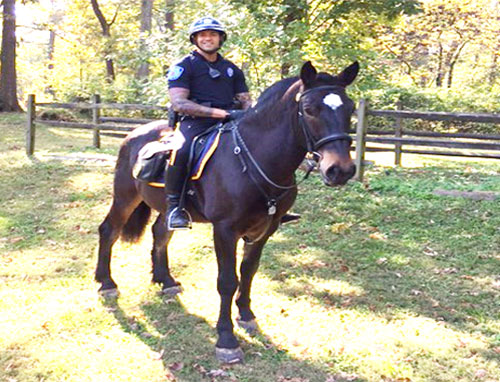 Officer Carter has been with the Richmond Police Department since December 2010 and joined the Mounted Unit in July of 2016 and his partner is Toby, Toby is a 16.2 hand, draft cross gelding, born in 2010 and he joined the Unit in January 2016. 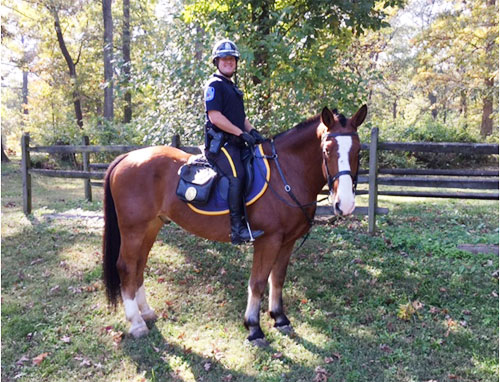 Officer Collins has been with the Richmond Police Department since April 2006 and joined the Mounted Unit in July of 2016 and his partner is Samson, Samson is a 16.3 hand, draft cross gelding, born in 2007 and he joined the Unit in June 2015.

Aslan, the newest member of the RPD Mounted Unit! 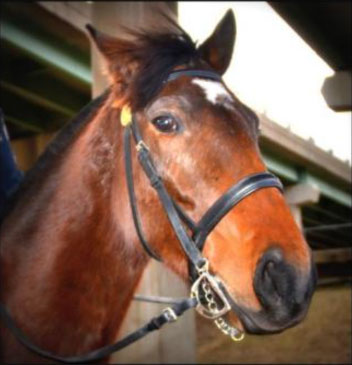 Congratulations are in order for the Mounted Unit! On Friday they introduced Aslan, the newest member of the RPD Mounted Unit! Aslan is a 3 ½ year old Percheron/Thoroughbred Cross horse from Asbury University, located outside Lexington, KY. On Friday, Harold Rainwater, the director of the Asbury Equine Program, and Tori Branand, the student trainer who worked with Aslan, drove all the way to Richmond for his badging. After completing an obstacle course to showcase some of his skills and abilities with Mounted Officer Amanda Acuff, Aslan received his badge! Welcome to the team!

Rio rides off into retirement today!

Rio rides off into retirement today! Here's a quick look at the Mounted Unit's Rio working a recent event in Shockoe Bottom - and some inside info. Rio will be missed!