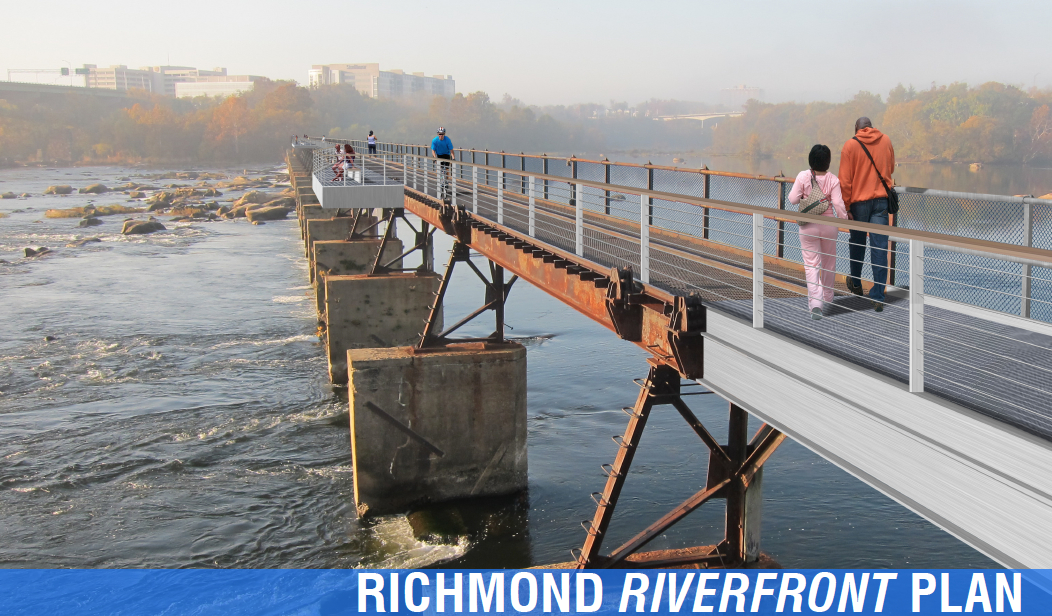 The Richmond Riverfront Plan, adopted by Richmond City Council in November 2012 as a part of the City's Master Plan and Downtown Plan, is the City’s vision document for the Riverfront. The plan covers both sides of the James River from Belle Isle to Rockett’s Landing and outlines steps for the improvement of our Riverfront as a single unified, cohesive space. It discusses the Richmond Riverfront’s unique history and makes recommendations for each section of the Riverfront. Finally, the plan establishes priorities for the Riverfront and outlines potential mechanisms for management of this unique place in our city. Using the tabs below you can learn the latest news on the Plan, review the plan document itself, follow implementation projects, and communicate with us about the plan.

The Brown’s Island Dam extends across the James River from the western end of Brown’s Island to the southern abutment of the old Richmond and Petersburg Railroad, now known as the Manchester Climbing Wall. The historic dam structure consists of a series of concrete piers linked by low concrete weirs and a steel superstructure. The power plant ceased operation around 1980, ending almost eight decades of dam operations. In 1992 Venture Richmond converted a portion of the dam into the Three Days in April Civil War interpretive exhibit and observation platform. 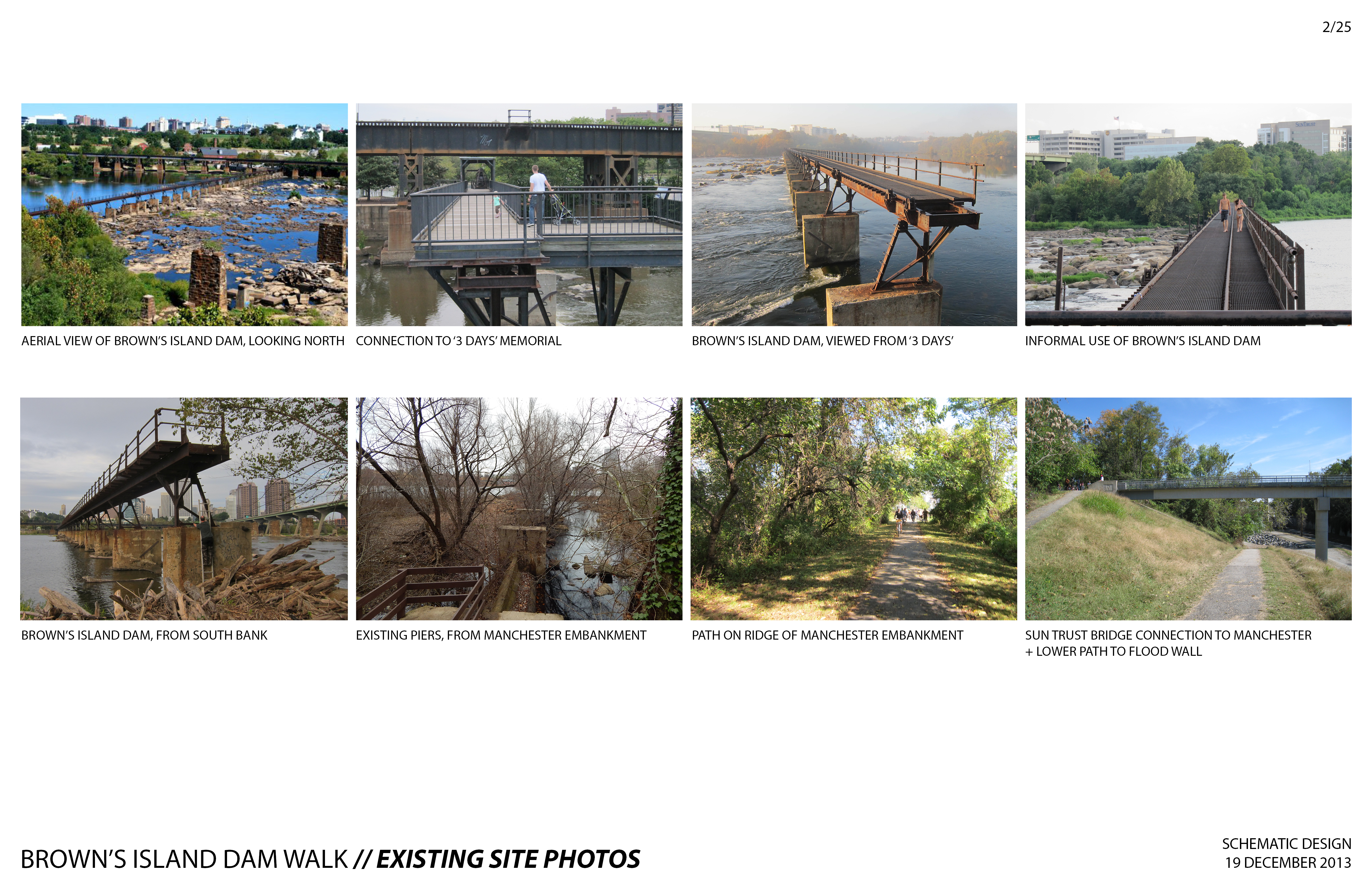 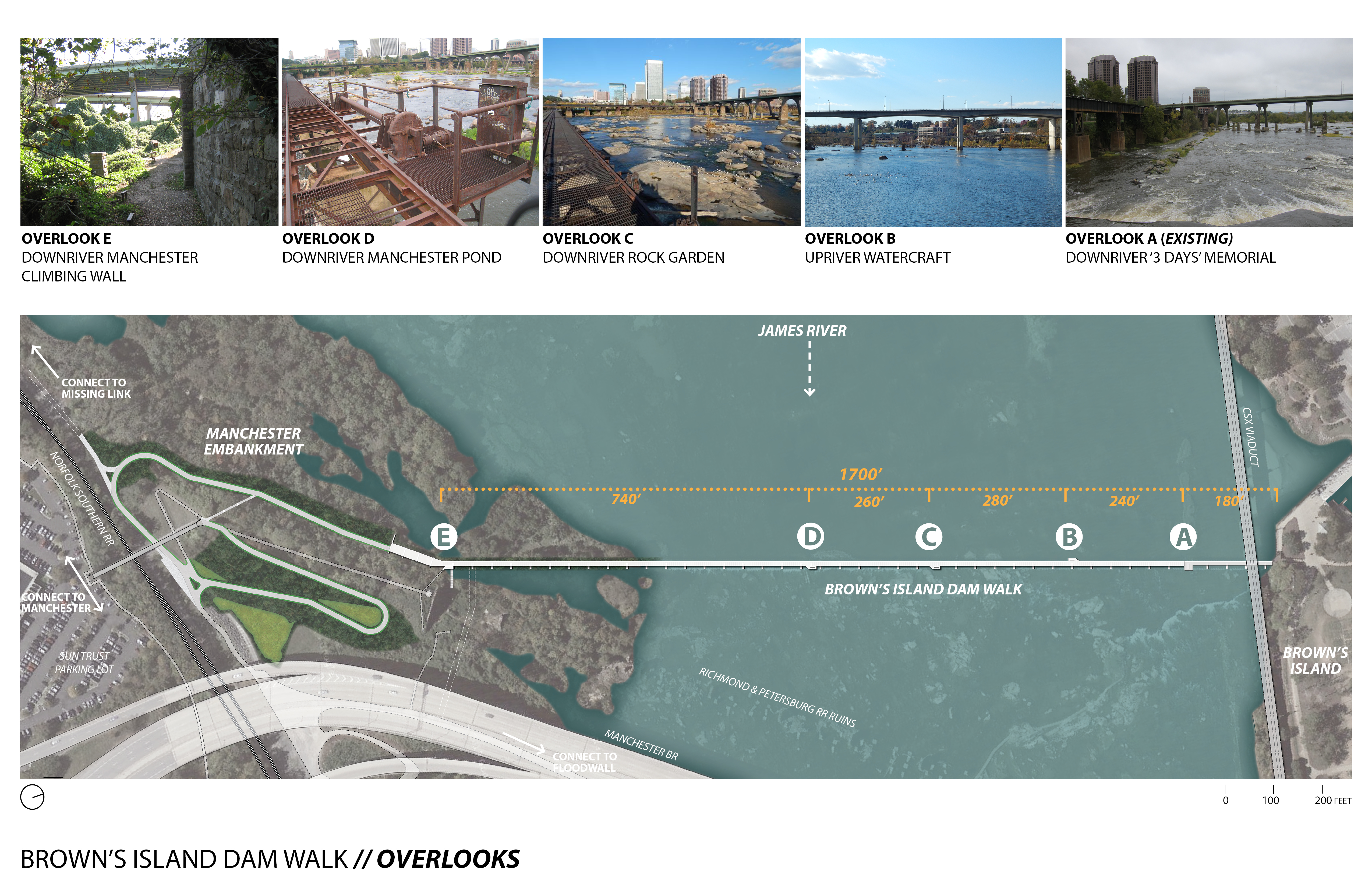 The renovation will create a safe and attractive shared-use path across the river, retaining as much of the existing historic structure as possible. A new metal deck and railings will provide a safe surface for users to walk, run, ride a bike, and travel in a wheelchair across the river. Three new overlooks will complement the existing Three Days in April exhibit. The overlooks will provide opportunities to pause, reflect, and enjoy the fabulous views from the middle of the James. The new structure will leave the Three Days in April overlook in place.

The completed structure will open one of the most beautiful sections of the James River to cyclists, pedestrians, and the disabled. It will create a major non-motorized transportation route across the James River and provide a welcome companion to the beloved Belle Isle Pedestrian Bridge. 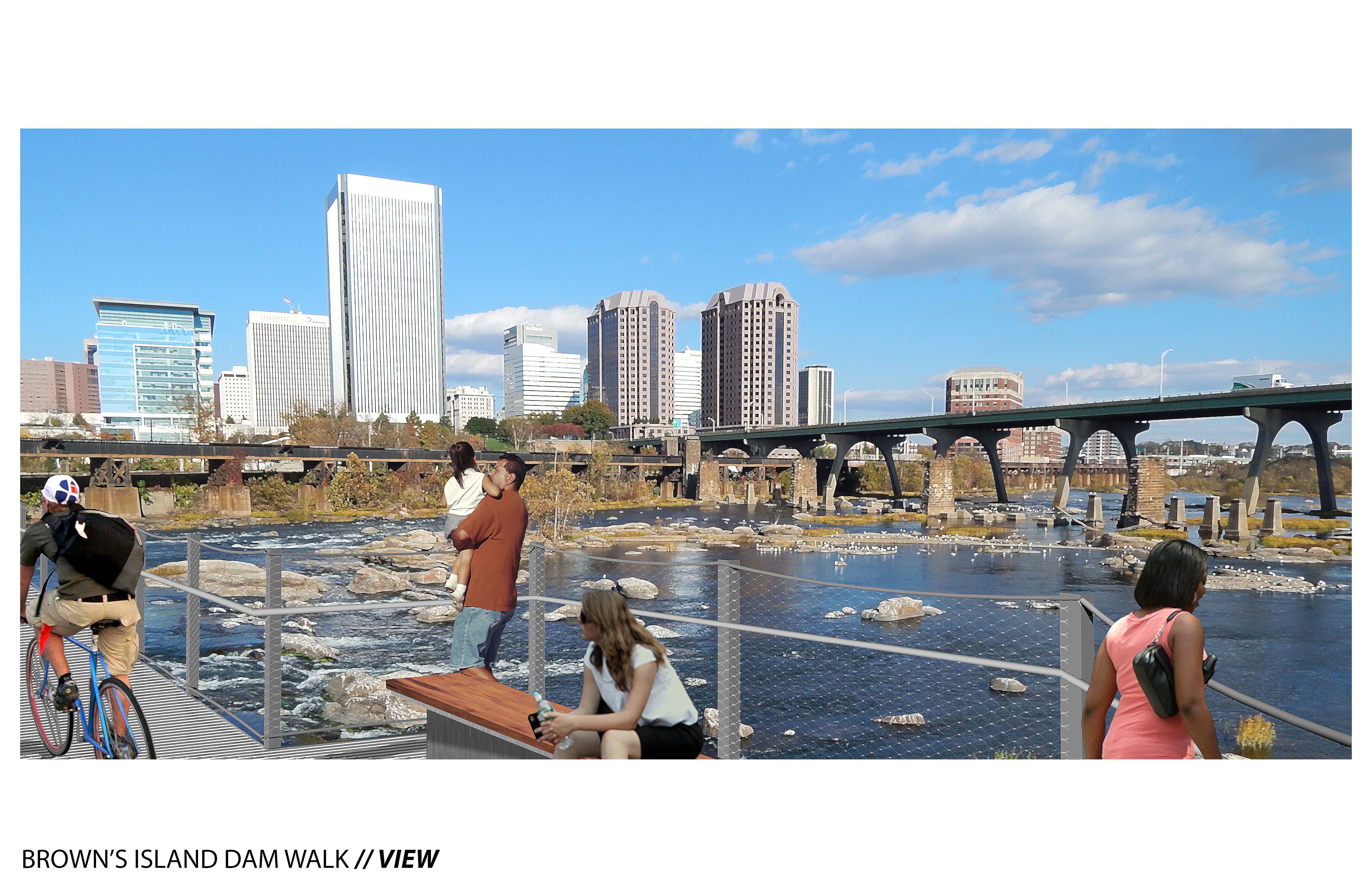 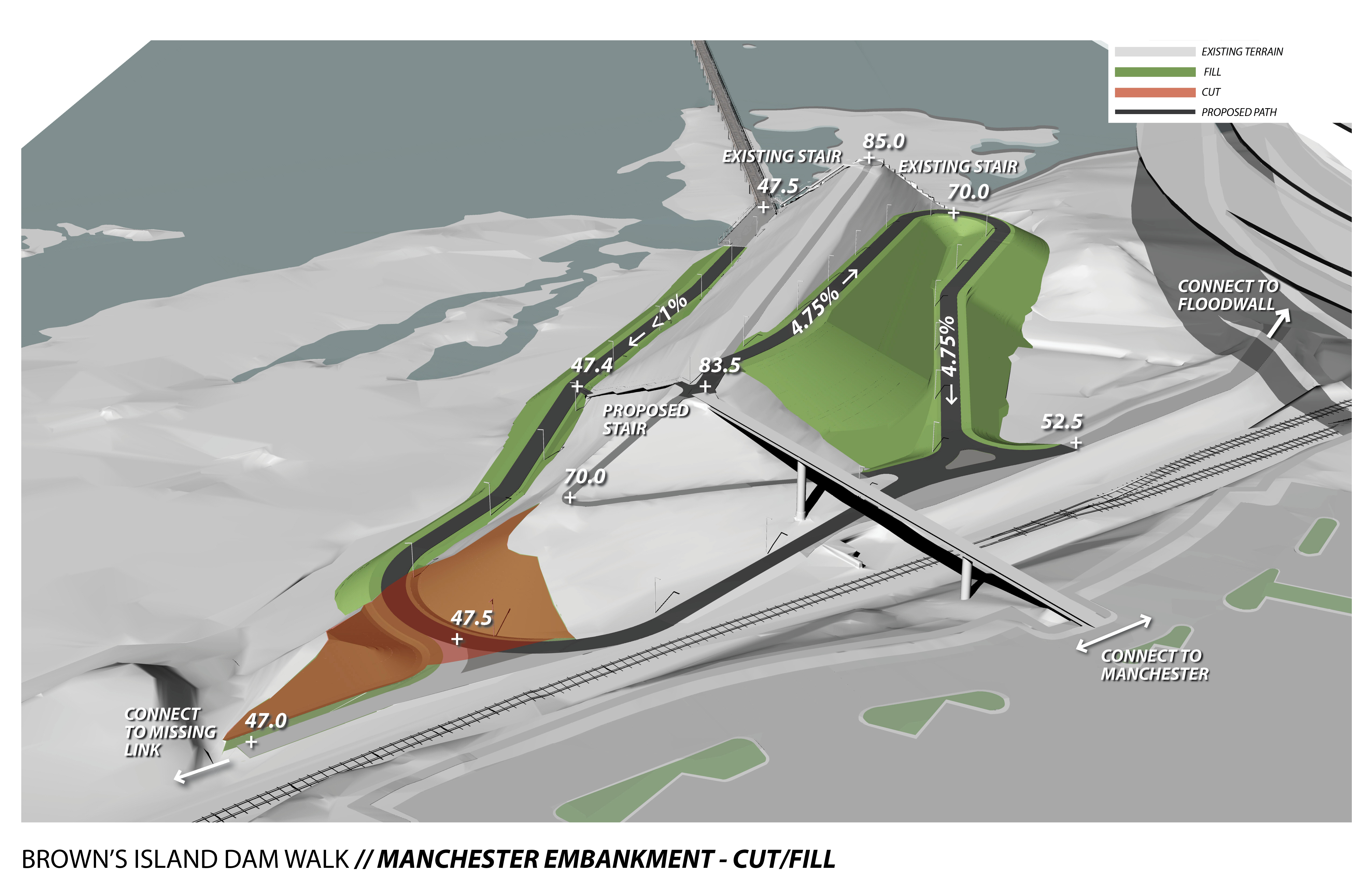 The center portion of Chapel Island is taken up by the Shockoe Retention Basin storm water management facility. This facility is closed to public access at the present time, but the eastern and western portions of Chapel Island are currently open to the public. The Riverfront Plan envisions a series of recreational improvements made over time, on and around the basin structure and along the length of Chapel Island river frontage. The first step in this public access effort will be construction of a universally-accessible shared-use pathway that will connect 14th Street to Great Shiplock Park. A route for this path is being identified and a schematic design for these public access improvements are intended to be posted on the website and presented a public forum in the not-too- distant future. 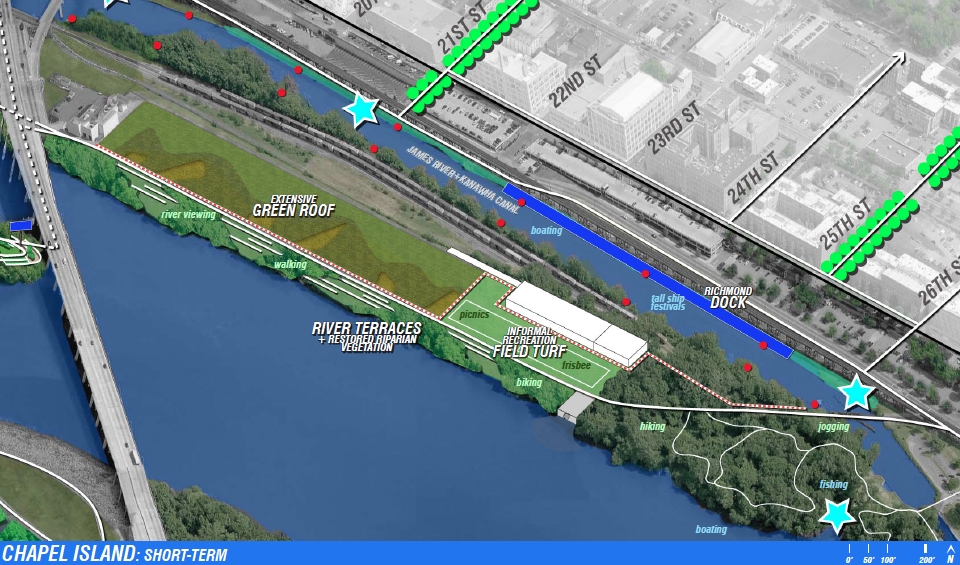 The next step in implementation of the Riverfront Plan is the planning and construction of improvements envisioned in the Lower Riverfront section of the plan document. Construction documents have already been completed for the Virginia Capital Trail from Henrico County to Great Shiplock Park and this trail section will be finished in 2014. The City is in the process of acquiring the Lehigh Cement facility and has funding to demolish the Lehigh Towers after the concrete plant closes. The construction of a park and river terraces on the Lehigh site as envisioned in the Plan is the next component of Downriver implementation. The preparation of construction documents for the Lehigh park project will begin in 2014, public input will be sought in the schematic design phase in the near future, and the completion of construction is anticipated in 2016.